For stress test we used:

We have tested JIRA having specific requirements in mind. We don't know if JIRA would scale well for instances exceeding our constraints:

What does work really well

From user's point of view, most of the time interacting with Million Issue JIRA feels the same as smaller one (typical response time below 3s).

Single issue operations (create, comment, workflow transitions etc) don't suffer at all from having a million issues in your JIRA.

Operations involving multiple issues, such as reports, filters, search etc, work well as long as you use data available in the Lucene index.
This includes searching for your unresolved issues, creating a pie chart for components, viewing issue details or showing the activity stream.

What does not work that well

JIRA is vulnerable to building up amount of concurrent threads serving requests, leading to out of memory errors.
Any system-imposed pause (garbage collector, choking on disk access, reindex in the wrong time) makes this trip order of magnitude faster.

Good thing is that JIRA can often recover from the out of memory condition - the long-running processes eventually finish, release their memory and things go back to normal.
Bad is that it can take a few hours to eventually recover - the backlog of tasks started may grow too big, concurrency and GC overhead may be too great and there is no choice but to kill (and reindex) the instance.

Take them with a grain of salt, as esp. timing values depend on the performance of the hardware. We used Amazon servers that are not advised for JIRA due to virtualization overhead, we also used PostgreSQL instance sitting on the same machine - which may be good or bad (network connection between JIRA and the DB vs DB eating up local resources).

We haven't repeated the tests to get statistically meaningful data either.
Having said that, without virtualization JIRA can behave only better, so if this figures look good for you, you can make it even better in your non-virtualized environment.

I suggest taking this one with a whole teaspoon of salt ;-)
We deny any responsibility if you buy hardware based on what we have written and it turns out to be insufficient in production environment.

During bulk import from CSV we noticed the following:

Indexes in our Million Issue JIRA occupy ~4.5GB - this means that you can put them on some extra-fast-but-extra-expensive-per-MB media. Including a ramdisk, but that would be too extreme (we have tested that - worked like charm until system killed our JIRA due to lack of system memory)

Same for the DB - there is relatively little data there - attachments are stored on the file system.

During the tests we had disk data transfers reaching 30MB/s and a lot of time spent waiting on IO, so the faster disk you can organize the sooner you see the results of your complicated queries and the less chance of overloading the system.

Make sure you have enough RAM. The full reindex operation performed during import never finishes if you run out of heap. 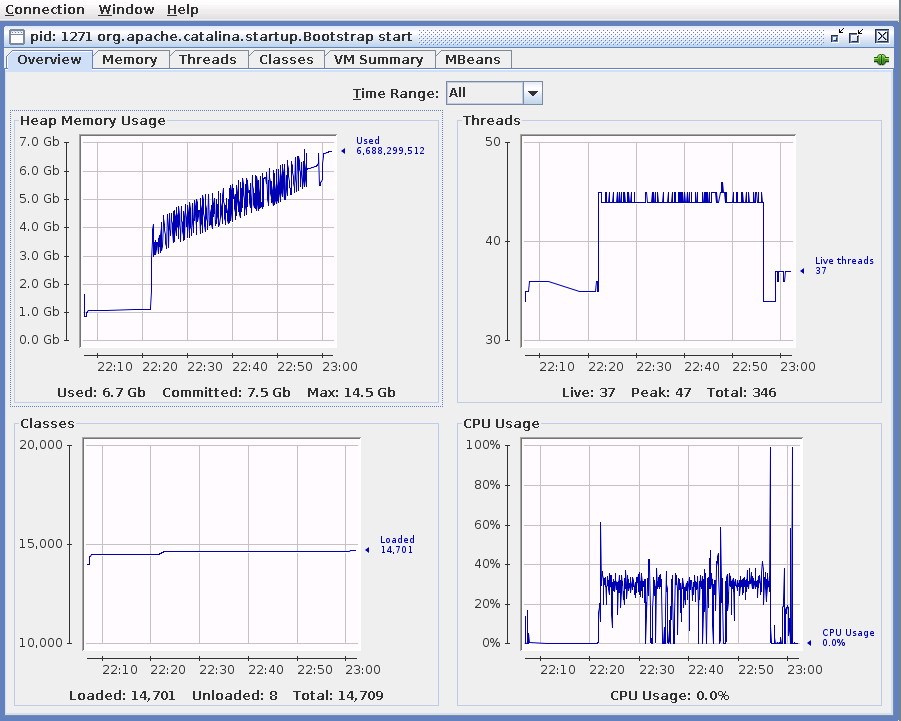 Notice the amount of threads in the picture below and what happened to heap & CPU usage.
The new threads were http server threads.

This happened with the Parallel garbage collector - we believe it might look a bit better with Concurrent collector.
JIRA would have been overloaded anyway, so what needs to be done to let it survive is limit the amount of http serving threads (less concurrent calculations) 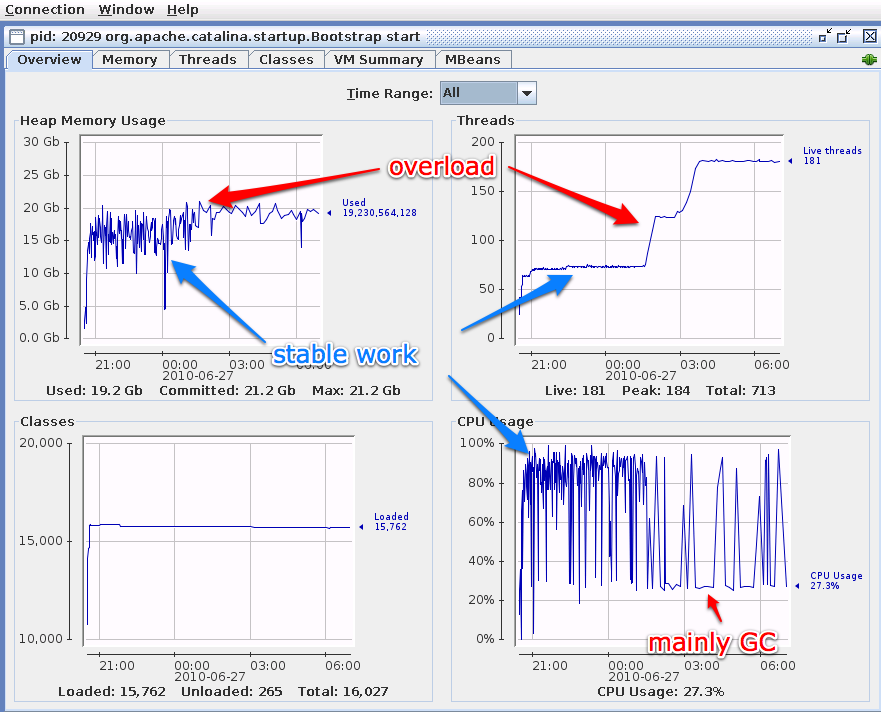 This one includes the killer Recently Created Chart, which took about a minute to render on our setup. We recommend you don't enable it on your production Million Issue JIRA :-)

The dashboard was refreshed every minute to simulate a manager who likes to be up-to-date with project status. 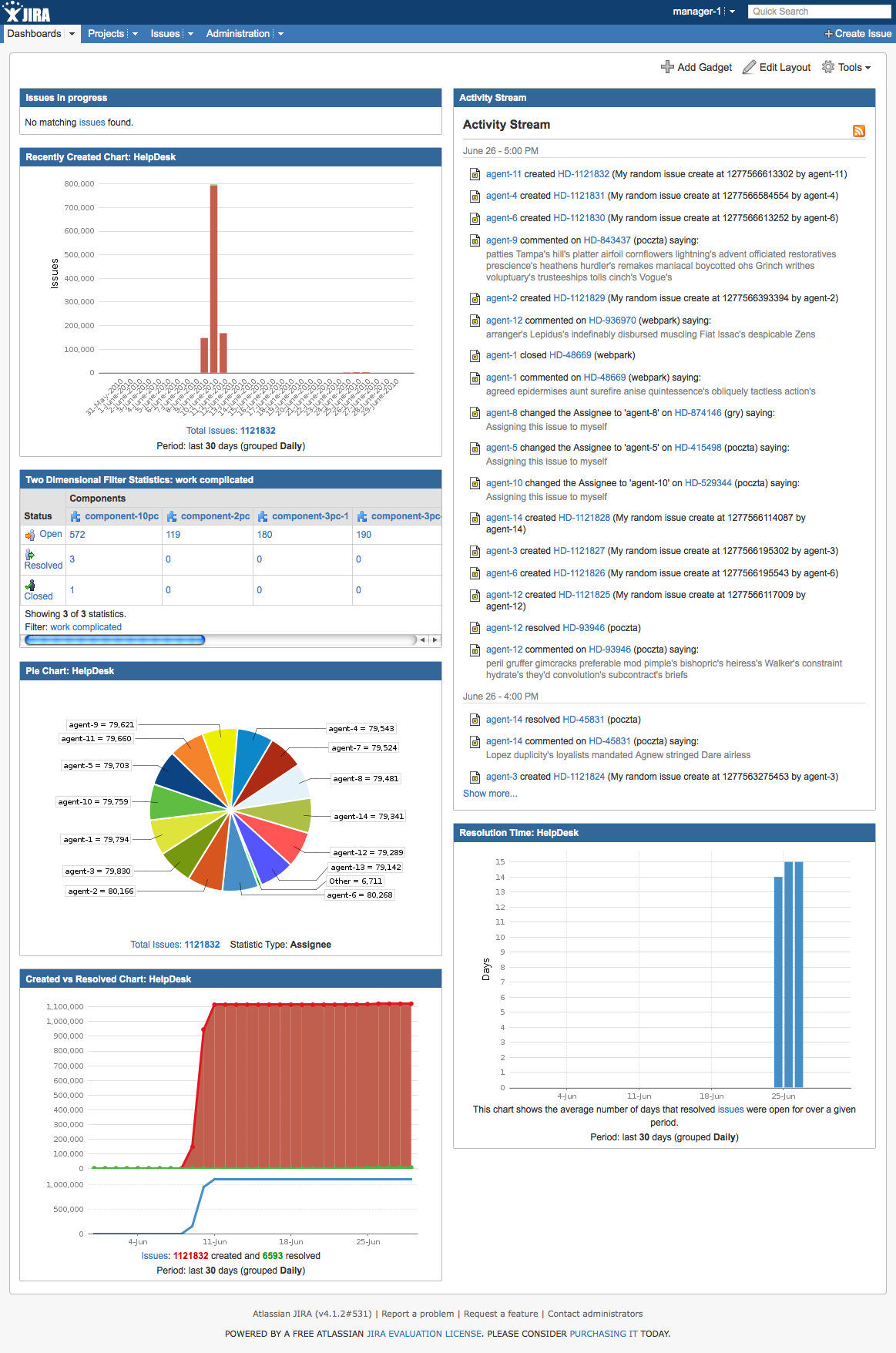 What we assumed a typical user dashboard would contain (no slow gadgets here, each showing up in a few seconds)

One copy refreshed every 30 seconds - users should be busy doing something else, not refreshing their dashboards all the time :-) 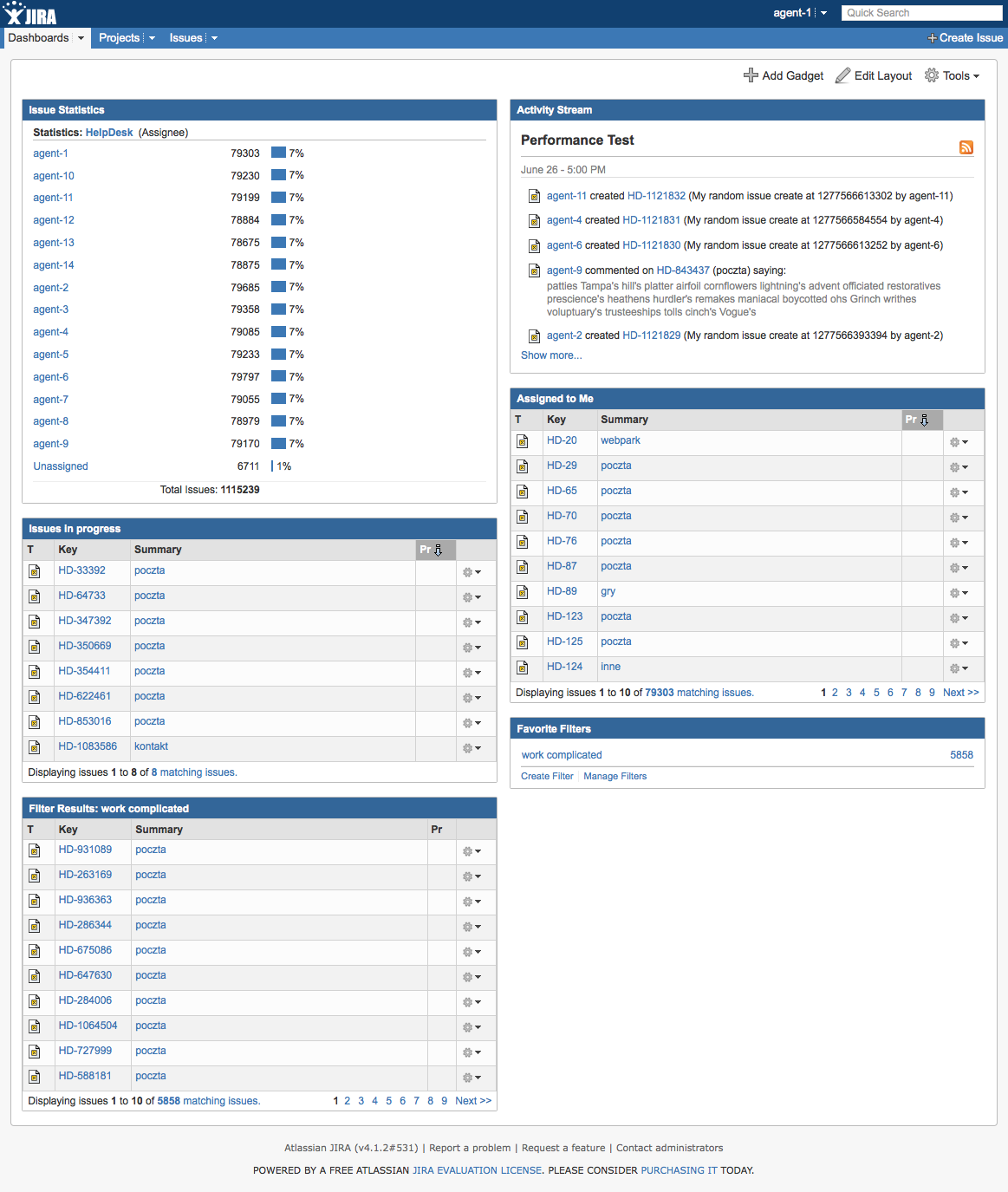 We created a CSV file (see our CSV generator) to be imported by built-in CSV importer.
Surprisingly we were able to populate JIRA with more than 1 million issues in less than 2 days.

We have written a JIRA service that added comments to issues present.

The comments consisted of strings of random English words.

The parameters we used for the service:

Having JIRA populated with initial data, it was time to perform load tests. See details of the load agent including the source code.

With so many issues (pun intended

), JIRA becomes really sensitive to various configuration settings and usage patterns. To let it survive the load for many days - you will need to do your homework, as we did.